BC Experience | About The Map 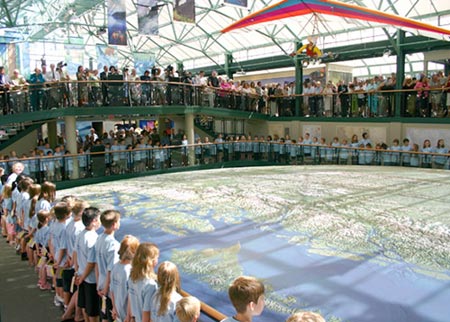 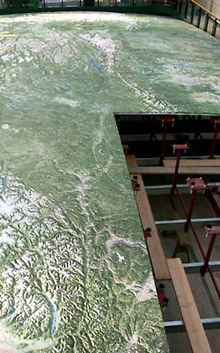 The map is larger than a doubles tennis court, so large that from any vantage point on three levels you can easily see the curvature of the earth.
The map’s exquisite detail and vivid colours come from digital satellite imagery so you see B.C. just as it would appear if you were looking down from space.
It has been built with precision using a process that converts digital terrain survey and satellite image data into high accuracy, high resolution, physical models.
The process consists of carving the shape of the landform into a solid block of high-density foam using the data to guide custom cutting machines that operate with pinpoint accuracy.
This results in a topographic representation of astonishing detail.
Computer controlled print heads are then flown over the face of the map to render it in vibrant, accurate colour.
Fabricated from over 260 million elevation points and more than 100 billion droplets of ink, the results are a literal transcription of the best geophysical data that modern science can provide showing an idealized view of Earth from space.

Making of the Map 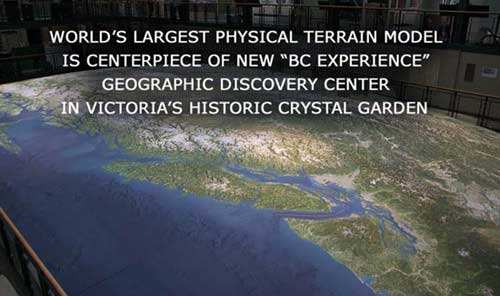 Only from a satellite orbiting 705 kilometres above Earth can British Columbia be seen as it appears at the BC Experience.
Photographs taken from these lofty heights every 16 days, combined with 300 million elevation points, comprise a three-dimensional model of the province as it is in real life.

“The impact of the model on visitors is initially emotional,” says Lawrence Faulkner, of Solid Terrain Modeling Inc. in Fillmore, California, the company that created this unique relief map.
“Next they begin to identify landmarks that are known to them. Then come the stories, the questions, the memories associated with the places visited or the features never before seen.”

As part of the Canadian Cordillera, a major mountain system of the world, B.C. is a succession of north-south ranges from the Rockies to the Coast.
From promenades above the Living Map, you can trace out the broad valleys that separate the ranges, see the Pacific fjords penetrating far into the Coast Mountains, follow the Fraser River up from the Strait of Georgia to the Rockies, and see its myriad tributaries pouring down onto the Interior Plateau.
In the east, the Rocky Mountain Trench appears as a gaping gash along the western edge of the Rockies from Montana to Yukon. Each of B.C.’s largest rivers-the Fraser, Columbia, Peace, and Liard-flow through parts of the trench.
Solid Terrain Modeling has built many 3D maps, but none as large and complex as the BC Experience map.


At a scale of 1:99,000, and vertically exaggerated by 50 percent, it represents one-538th of the Earth’s surface. Perhaps its most remarkable feature is the accurate curvature of Earth-viewers on lower levels can’t see opposite ends of the map.
Source data are a digital elevation model and satellite images processed by Rob Stacey of WorldSat International in West Vancouver.
These data were used to guide machines that shaped the terrain from a solid block of high-density foam.
The block was primed white, then coloured with a custom-built terrain printer to represent the satellite imagery.
The map was manufactured as 100 panels, shipped to Victoria, then assembled.
Laid over an intricate steel grid, the height of each panel is adjusted by individual supports.
Because of the curvature of the Earth, no two panels are the same shape.
“The result of all this,” says Faulkner, “is a literal transcription of the best geophysical data that modern science can provide showing an idealized view of Earth from space.”
Text courtesy of BC Experience

WorldSat International Inc. was incorporated in 1987. Since that time, WorldSat International: - Introduced the first cloud-free composite of the earth based on 1km NOAA data - Was the first to produce a satellite image of the Earth incorporating true elevation data to generate shaded relief - Produced the first true satellite atlas of the world and continues to break ground in the reproduction of 3D and perspective views of the Earth based on satellite imagery

Tagged with: bc experience, giant map